SFA Wiki
Register
Don't have an account?
Sign In
Advertisement
in: Pending Teams, Current Teams, All Teams,
and 4 more

The Alberton Swamprats is a fantasy football club re-entered into the Sweet FA. Formed in Season 04, the club competed for the next 4 seasons before going in to a 1 year hiatus. Season 9 saw the 'Rats competing in the Sweet FA once more, before going in to another hiatus from season 10. Season 16 saw the revival of the 'Rats, led on field by MannumPower and Jonts with Toots Hibbert displaying his masterful coaching talent. The team containing 20 rookies out of a full squad of 32 made it the finals in their comeback to the Sweet FA.

The Alberton Swamprats beginnings goes back to 2003.  After a couple of seasons of the Sweet FA, murmurs began around the starting of a club born from the Port Adelaide forum.  The club was formed and played a trial game against a team from the Adelaide forum.  The Swamprats, led by Macca19, won a tight contest with a goal seconds from the final siren.

The Swamprats did have an impact with their largely character-laden team operating through the mid-2000s. With one flag and one runners-up trophy from three Grand Final appearances (they drew a Grand Final with the Furies before losing the replay), the "Swampies" could arguably be regarded as the most successful club in operation.

Matches between the Swampies and other teams, in particular versus the Roys, would mutate into virtual yobbo grog parties, and any match thread was a delight - if disturbing - to read.

After a year in recess, a reprise instigated by Alberton Magpie would only last the one season, before the club went into hiatus again.

S16 saw the revival of the Alberton Swamprats, led by Geedub and MannumPower, with GeeDub bailing and heading elsewhere. A succesful re-entry into the league saw the Swamprats compete in the S16 Finals 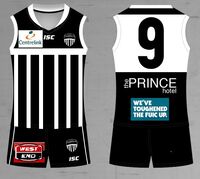 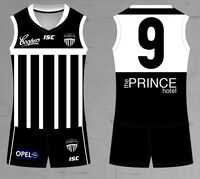 A disappointing year from the 'Rats as they struggled on the field winning only 5 out of 18 games. Off field also had its share of dramas with some key players taking personal leave or resigning which left massive holes for the coaching staff to try and fill. Captain MannumPower continued his good form from S16 racking up 361 possessions, followed closely by noobz0r (354) and spookism (334) with crazy_big_al and MoOP not too far behind on 305. Schulzenfest led the way with goal kicking, slotting 62 through the middle posts, and crazy_big_al dominated the ruck with 100 hit outs. Spookism and MannumPower roughed up the opposition accumulating 103 & 97 tackles respectively. These two also managed to suck the opposition in to giving away frees, Spookism snaring 50 and MannumPower 49. Jonts and MoOP showed the way with taking the ball out of the air, snaring 93 & 91 marks. With several key players confirming their continuance at the 'Rats, some interesting new signings, and brand new sponsors, season 18 looks like it will show the 'Rats are on the improve as they march towards a flag.

The 'Rats had succeeded in their bid to re-enter the SFA. With a full squad of 32, of which 20 were rookies, the season was by no means going to be an easy one. However, under the clever guidance of the few senior players, the rookies lifted and took it to the league winning 9 out of 18 games, and making the finals. Beating the Mt Buller Demons in the first week of the finals, but going down swinging to the West Coast Wonders in week 2. A year that showed a lot of promise in the years to come at Alberton. 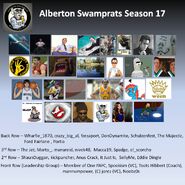 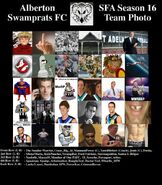